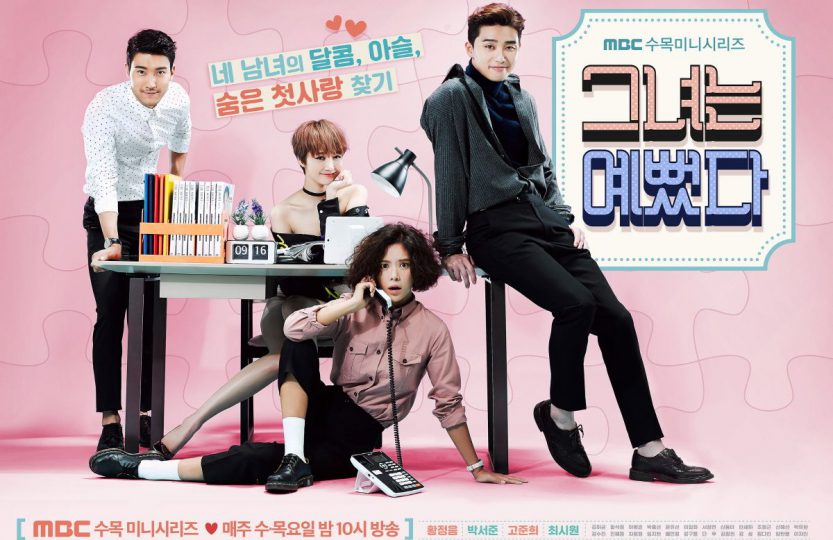 In childhood, Jin Sun Joon (Park Seo-Joon) and Kim Hye Jin (Hwang Jung Eum) were the best friends. She was a popular, pretty girl and he was a little fat boy was who fell in love with her. Over the years their ways were separated, their lifes becomes more complicated and their looks completely changed.

Jin Sun Joon has become a handsome, successfull man, but Kim Hye Jin is not-so-pretty, not-so-young girl without money and constant work. Jin Sun Joon returns to Korea after some years and tries to find his first love. At the same time Kim Hya Jin is given a chance to work permanently for the first time in her life.

This is one of the funniest comedy dramas. The main character is a wonderful girl, a little clumsy in behavior and a little unattractive in appearance (I do not know what they do to the actress that her hair are so big and messy). I envy her for this optimism, the energy she puts into everything she does and the ability to enjoy the smallest things.

She is incredibly devoted to her friends. For Ha Ri she is ready for the greatest sacrifices, she even forgives Sun Joon his shameless behavior without a blink of an eyes. It makes me laugh every time I see her loud and naive behavior with Shin Hyuk and his little jokes. His character is a diamond of this production. Together with Hye-Jin they create a great duet on the screen. Personally, I think he is 10 times more handsome than our main character and 100 times more funnier. And don’t forget his sexy husky voice.

Unfortunately, “She was pretty” only confirms the known truth, unwanted, but unfortunately undeniable – pretty people have easier life. In South Korea being pretty is almost a social obligation. I do not claim that such perfect people are happier, it is another matter. The case of Ha-Ri, best friend of Hye Jin, just confirms this.

Watching this drama, I caught up to the fact that, despite my admiration for the neglected Hye Jin, I was waiting with excitement for the moment when our heroine becomes a beautiful swan, and her former friend will find out who she really is. Of course, this moment is coming and I have the impression that with the smoothed face of our heroine drama lacks craziness and action. This drama is really cool. I had a lot of fun with it, but if someone is looking for an electrifying romance between the main couple, it can be a little disappointing. It is primarily a pleasant comedy, which can be repeated many times.

1.As for me, Jin Soon Jun is a bit bland, especially when compared to Kim Shin Hyuk.