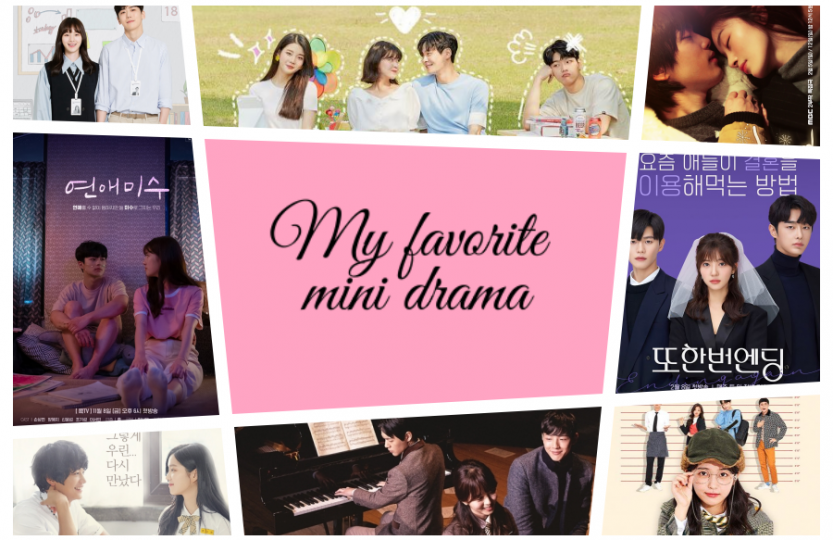 Recently, I liked mini drama (web drama) and decided to make for you my list of mini dramas, which I enjoyed watching very much. “Twenty Years Old” was my first web drama. I have a great fondness for this and I often come back to it. This list also includes the drama that I love the most and it’s “Gogh, The Starry Night”. I highly recommend all the drama given here. Almost all are about love, but also about the lives and problems of young people. If you know any cool mini drama, please give me titles please in the comments. 1.Page Turner (3×60 min)
The story of a brilliant young pianist Yoon Yoo-seoul who loses her eyesight after a car accident. She must learn to live again and find the lost joy of playing. The girl gets help from a young athlete Cha-Sik, who gave up sports after an injury and had to find a new goal in life. A great drama about dreams and friendship. 2.Medley Puberty (4×60 min)
Choi Jung Woo returns with memories of his first love and his school years that he spent in the countryside. Because of his father’s work, his family is still moving and he is changing schools. At the new school, he gets involved in a relationship with a girl he doesn’t like at all, a fight with school bully who he is terribly afraid of and in addition a participation in a music competition that nobody wanted to take on. 3.Gogh, The Starry Night (20 x 20 min)
Go Ho works hard at an advertising agency. Unfortunately, her mean boss doesn’t appreciate her. When she is transferred to another team she is very happy. Her joy did not last long, however, because the new boss turns out to be her ex-boyfriend who broke up with her. 4.Splash splash love (2×70 min)
Dan Bi is in the last grade of high schools. During a great downpour, she falls into a deep puddle, which, like a time tunnel, takes her to the era of the Joseon kingdom. There, dressed up as a man, she meets a young king who in the future will become the most distinguished figure in Korean history. 5.Twenty Years Old (4x 20 min)
Kim Hye Rim and Lee Ki Kwang were friends in high school, but then they lose contact with each other. At the age of 20, they meet again. She is a student and he is the idol of all teenagers and a member of a popular band. They must keep their relationship secret from his crazy admirers and roommate Hye Rim, who is his biggest fan. This drama demonstrates why Korean idols are not dating. 6.Exo next door (16×15 min)
Ji Yeon Hee has never had a boyfriend, since she blushes so much since she was a child. It takes her confidence away in the presence of every handsome man. One day, it turns out that a house in her neighborhood is rented by several young men. Ji Yeon Hee accidentally discovers that they are members of the popular band EXO. 7.Somehow 18 (10×15 min)
28-year-old Gyung Hwi is a doctor, but still can’t enjoy life. He still remembers a girl from school who stopped him from suicide. She made him live, but a few days later she took her own life. Mysteriously, Gyung Hwi goes back to school years and has a chance to save the girl from death.

8.Failing in love (10×25 min.)
Kang Pa Rang and his three best friends face their first love experiences. They are all 18 and enter a difficult period in their lives in which they have to answer many questions, and one of them is: where is the border between friendship and love? 9.Love Buzz (web movie) (29 min)
Kim Ji Woo is a frustrated 18-year-old who wants to find a boyfriend at all costs. One day she meets a young man who declares her that he is her son. He came to her from the future to help her date with his future father. A cute mini movie. A bit surprising and a bit touching. 10.Queen of the ring (21×10 min)
Mo Nan Hee, a girl with low self-esteem, finds a magic ring that turns her into a real beauty. Thanks to this, she becomes popular at school and can seduce any man. The most handsome and the most popular boy at college falls in love with her. However, Mo Nan Hee is different from all his previous girlfriends. 11.Binggoo (Frozen Love) (2×60 min)
Go Man Soo lives peacefully in 1979. He is a poor artist in love with a very sick girl. One day Man Soo freezes unexpectedly for 37 years. He wakes up in a completely changed country. His main goal is to find information about his beloved. He is met by chance by Jang Ha-Da. 12.Wednesday 3.30 PM (15×15 min)
Seon Eun Woo is abandoned by her boyfriend. She is devastated, but she tries to get him back at all costs. Her friend helps her. Thanks to his advice, Seon Eun Woo wants to make his ex-boyfriend jealous and make him return. 13.Crushes Reverse (Crushes are Turned) (8×7 min)
Yoo So Mi has a crush on her older sister’s boyfriend. It annoys her terribly, because she liked him first. Her good friend is the brother of her unrequited love and constantly teases her. Over time, the relationships between these four change. It’s hard to find this drama, so I throw you the link here 14.Miss Independent Ji Eun (8x 10 min)
Ji Eun at the age of 24 begins a whole new life. After graduation, she enters the world of responsible adults, in which she must make a number of important decisions. Drama shows how she is doing in her first job and in love life. At the end of each episode there are practical educational videos, e.g. on how to take a taxi safely or how to survive a woman’s period. 15.Miss Independent Ji Eun 2 (16×13 min)
Ji Eun (a completely different heroine than in the first part) is in her first year of study. He starts an independent life outside his hometown. She tries to make the best of her study time so that she doesn’t regret it later. At the end of each episode there are great educational videos about how, e.g. Not getting drunk at a party, how to choose student clubs, or how to survive annoying superiors on internships in the office. 16.Ending Again (12×15 min)
Two young people spend one night together. When they meet again after some time, they decide to enter into a contract marriage, thanks to which they will get government help at their own apartment. Things get complicated when a girl’s ex-boyfriend returns. 17.Who Kissed Me (Kiss Scene in Yeonnamdong) (12×14 min)
Yoon Sol is obsessed with kissing. In theory, she knows everything, her practice is worse. After a very drunk party, the girl remembers that she was kissing a boyfriend, but she can’t remember with whom. She decides to investigate and find the owner of her first kiss. 18.XX (10×25 min)
Drama tells the story of two former friends, who, after betraying one of them, lost contact with each other for 5 years. One day it turns out that they will work together as a boss and employee. Drama deals with the topic of friendly betrayal, male-female betrayal and dealing with the past.