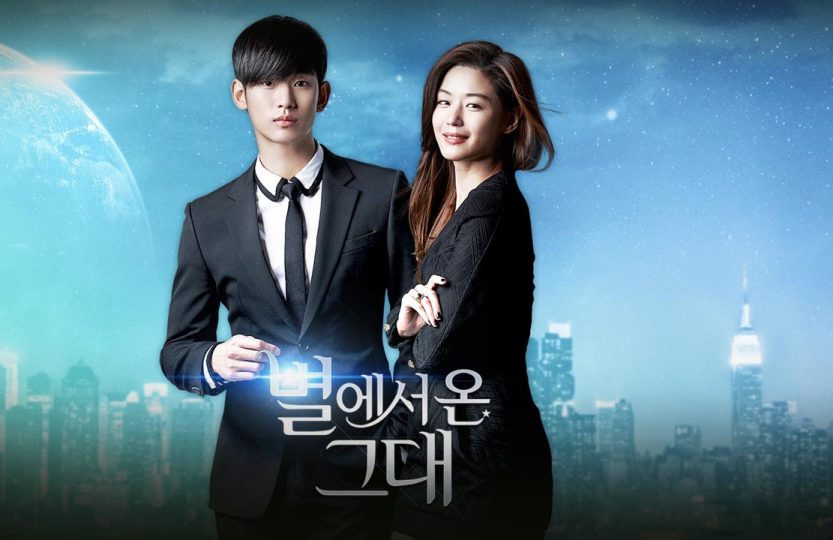 400 years ago a flying ship arrives to Korea. As a result of certain events, one of his passengers is abandoned on Earth. He can’t go back to his home, so he lives quietly for 400 years among people. In modern Seoul, our newcomer’s name is Do Min Joon and works as university professor. He becomes the neighbor of the very famous and spoiled actress Chung Song Yi. At first they do not like each other, but with time the love blossoms, even though our hero fights against it. The moment comes that Chung Song Yi is in imminent danger, and Do Min Joon, is forced to use his extraordinary powers to save her from oppression. Pretty old series (December 2013), which has become a huge hit and should be watched by everyone who is interested in Asian dramas. Let me be honest – I was very suspicious of it. The whole story about love between the alien (!!!) and the famous actress seemed to me exceptionally unbelievable and even cheesy. The series has received very good reviews. On the forums fans were writing about it in superlatives, and China struggled with total obsession. Well, millions of Chinese people can’t be wrong, so I decided to bend my neck and take a chance. From the first episode, the series definitely seduced me. Remembering the serious faces of our heroes on promotional posters, I expected something terribly stiff, but the whole Chung Song Yi is a walking comedy. I liked a lot about this series: the main character’s narrative, humor, action, clothes (Chung Song Yi creations), and the main pair of actors – Kim Soo Hyun and Jun Ji Hyun – and the chemistry they managed to create. Jun Ji Hyun in the role of spoiled and not very brilliant (just stupid) celebrity only confirmed everyone in the belief that she is a really good actress who has a great distance to herself. As for Kim Soo Hyun, he is a damn good actor and of course he is very handsome. If every alien looked like him, most of the women on Earth would probably be waiting for an invasion. I had the opportunity to watch him in several productions and he surprises me every time. After this drama, his popularity has increased throughout Asia, and he probably picked up all possible advertising contracts. Unfortunately, he is now in the army and we have to wait for his next projects until the summer of 2019.

I love this drama, but there are also some slightly cheesy moments. I assure you that humor compensates them. I highly recommend it with a clear conscience. I know that the alien idea seems rather strange, but it is really worth watching

1.The main actors and chemistry they managed to create.
2.Humor.
3.Clothes of the main woman character. Every of her creations were pulled straight from the runway.
4. An interesting ending.

Big hit comedy My Love From Another Star romance