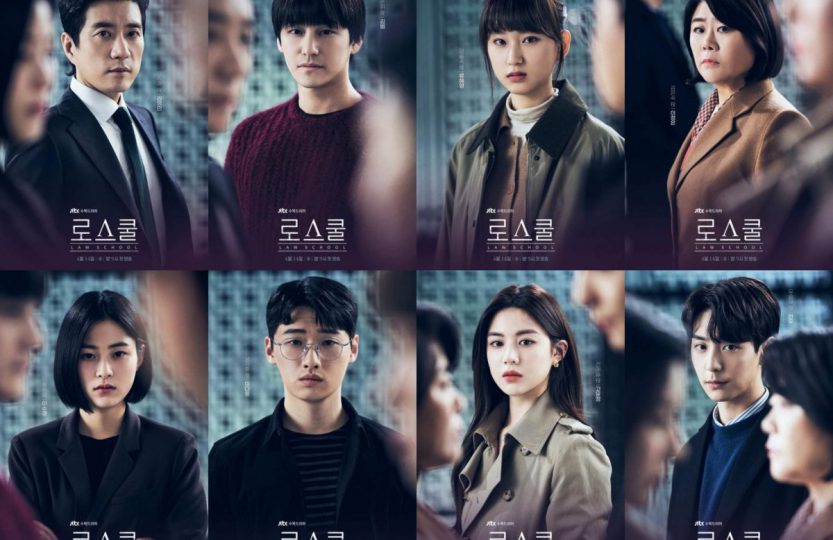 At one of the best law schools in Korea, one of the faculty members dies suddenly. Yang Jong Hoon, the current law professor, former prosecutor and former friend of the victim, is accused of murdering him. Together with his students, he investigates the murder and tries to clear himself of the charges.

Dramas with law as their main theme have never been my favorites. Complex legal terms overheat my brain, especially when I watched the drama in English, which is not my mother tongue. I was encouraged to watch the LAW SCHOOL drama by the cast and the fact that the action takes place among law students. I can safely say that the actors and the chemistry of their characters was the greatest advantage of this drama.

Kim Myung Min as Professor Yang Jong Hoon was amazing. Cool in assessment, extremely intelligent and, above all, very professional. He never missed an opportunity to teach his students. He never gives them a ready-made solution, always persuades them to go beyond the limits, but still within the law. It was he who made Kang Sol (A) believe in herself and that thanks to the law (although very imperfect), she can help people in need. Kang Sol (A) is not very gifted and does not come from a wealthy family. Everything she has gained with her hard work and determination that can be envied. She is spontaneous, outspoken and very empathetic. No wonder Han Joon Hwi (Kim Beom) enjoys her company.

At the beginning it’s evident that Han Joon Hwi is flirting with Kang Sol (A) and the way he looks at her melts my heart. They both get along very well, they are like soul mates, despite the fact that they are much divided. He, unlike Kang Sol (A), is the best student of the year and a member of a wealthy family associated with the legal community. He can efficiently manipulate law enforcement agencies and expose their incompetence. He and Kang Sol (A) are members of a student group where they are trying to solve a murder at the university with others. It seems that each of the students has some secret and only with time it will come out who deserves to become a true representative of the law. The murder case is very vague at first, there are many twists and turns, many suspects, but it gets a bit boring and predictable over time.

The trial of Jeon Ye Seul was socially important (especially for women), but it was actually forced into the story a bit. I couldn’t understand her behavior. It irritated me terribly that she was passive, naive and had an eternally unhappy expression on her face. Overall, the drama ended without the fireworks. From the middle of the drama, I lost interest in why Seo Byung Joo was murdered. I am grateful to the writers for knowing how the career paths of my favorite couple of students will go, but I was counting on some sign that Han Joon Hwi and Kang Sol (A) would develop a more romantic relationship. This, and the fate of the rest of the students, I have to imagine for myself. My overall rating of the drama is very good, but mainly because of the characters (even the supporting ones) and the good music that turned up some scenes perfectly.