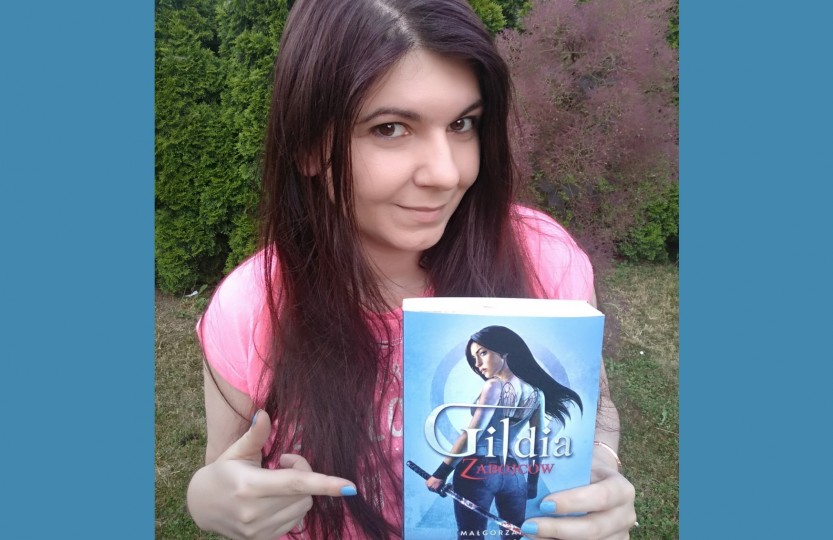 1.Did you follow someone specific to create the main character – Alyssa? Did you make Alyssa yourself from start to finish, or did you create it out of the different traits of the different characters you admire?

Alyssa was not modeled on anyone. I had an idea for her, but later she became the sum of what I imagine about a girl who went through her experiences – childhood trauma, strict Guild upbringing and torture. But I must admit that there is one character that I modeled on the existing one. Darius owes his beginning to my great serial love – Roan from “The 100”.

2. Why did you choose Asia, and more specifically Korea? Not Japan with the yakuza or China with the triads. Will the action of the entire trilogy take place mainly in Asia?

The whole story in the book arranged itself in my head, so unfortunately I didn’t have a specific reason. At the time of writing, it seemed like a natural choice, because I knew the history and culture of this country best from Asian countries. Although I do not deny that the Muga case made the most sense after it was placed in the Korean realities. Unfortunately, a scam on such a scale is quite possible there.

The action of the next volume will take place outside of Asia. This time I wanted to introduce the functioning of the American Assassins Guild and this is where Alyssa will have another job to complete. However, I don’t exclude a return to Asia in the third volume or prequel.

3. Do you listen to K-Pop or other Korean artists? If so, which ones?

I’m obsessed with one Korean performer, but of a completely different genre, because Yiruma is a pianist. I like K-pop, but I listen to it occasionally, although I don’t deny that I have my favorite band – Monsta X.

4. When you imagined INTERSTELLAR, did you mean any particular K-pop band?

No, not really, although my friend is 100% Army (“eM recommends”) and sends me various videos so often that probably the Interstellar boys eventually became a patchwork of many members of popular bands.

5. Where did you get information on how members of k-pop bands function? Have you read how the entertainment sector in Korea works?

At this point I have to apologize to all K-pop fans, because although thanks to deep research and long lectures from “eM recommends”, I had quite a good insight into how the entertainment industry in South Korea works, unfortunately I was aware that I had to flatten it a lot and do it more Polish for book readers. Through blogging and promoting K-dramas at conventions, I have learned that Asian topics are still approached with distrust, not to write “allergic”. This is one of the reasons why I thought that this simplification could be a good first step in encourage people to reach for Asian pop culture.

6. Have you ever been in Seoul? If not, where did you get information about Seoul from (parks, markets, food)? What did you follow when describing Seoul through the eyes of your heroine?

Unfortunately, I haven’t had the opportunity yet. Maybe in the future it will work. Initially, research was very natural, because I absorbed a lot of k-dramas, and with time I became interested in history and culture, so I reached for non-fiction. It was only when I had to approach the matter more seriously that I started browsing various guides and watching vlogs, and ended up with many hours of virtual walking on Google maps. There was no problem with food, because I love Korean cuisine myself. The big advantage when describing a foreign country was that Korea was a complete mystery to Alyssa. She could look at the city and its inhabitants from the perspective of a random tourist for whom the trip was not a travel dream come true.

7. Which Korean dish do you like best? Do you prepare it yourself?

Bulgogi is my absolute favorite! I am so addicted to it that I had no choice but to start preparing it myself. I recommend everyone to try it, because it is one of the best dishes in the world.

8. Will all the characters we met in the first part appear in the sequel? Will there be any new ones?

The vast majority of the characters will appear in the second volume. Many of them, who have been episodic so far, will get their threads, like Olympia and … well … better not to spoil;). In “Children of the Guild” there will also be some new characters, and some of them will even live to the third volume.

9. I know you watch Korean dramas from time to time. How did you get into this world? Do you have any favorite drama?

At first I thought K-dramas were not for me, and then a few blog readers told me that there was a production in which the main character enters the world of comics. I thought that the idea is so unique that I have to check how it came out and … I was lost! I lost my head for “W” and fell in love with the form and themes so different from American series. Soon after, I found “Moon Lovers: Scarlet Heart Ryeo”, which is my favorite so far, and the addiction turned up. However, I am not complaining.

10. Imagine that Netflix wants to produce a series based on your book. Who would you see as the ideal candidates for the main roles?

You mustn’t tease the dreamer and novice author so much! But since dreams cost nothing, it would be a dream come true to cast Zach McGowan as Darius. I couldn’t get him out of my head as I described the figure of the Guild King. Nina Dobrev would be phenomenal in the role of Alyssa, especially as she has Bulgarian roots like her. For good measure, I would ask for Park Bo Guma and here I give him complete freedom, because the actor is perfect in every role. Though I’m afraid that if I got any of these actors, no one would ever get me off the set.

For the next questions, I was inspired by a comment from a girl on an American forum. She complained about the lack of interesting books, where there is a good plot, a realistic romance, and the main couple doesn’t hide that they have sex, which, undoubtedly, is part of young people’s lives. It’s not about descriptions like “50 Shades of Gray”, but not hiding the fact that people share passion and desire.

11. What do you, as a reader and author, think about the sex scenes in New Adult books? Are they desirable? Do they contribute to the plot? Have you planned such scenes for the rest of Alyssa’s adventures?

Personally, I think a lot depends on whether or not they actually contribute to the plot. If so, then I am in favor of it, but as forced extras, they seem unnecessary to me. I treated Alyssa with quite delicate scenes, but there are definitely more of them in the second volume.

12. Is your main character – Allysa – a virgin? While reading the book, I was still wondering about this issue. She is definitely not an innocent prudish little girl, and her relationship with her ex-boyfriend was definitely something important.

She isn’t, and you’re right, she’s far from being a prudish girl from an innocent romance. Besides, the Guild killers are not reserved, as can be seen, for example, with Erik.

13. Alyssa’s world is mostly a world of men. Did you plan to further develop another female character? Alyssa’s friend maybe?

Yes! In the second volume, Olympia, I finally had more time to spend and I enjoyed writing her scenes. Thanks to her enthusiasm and positive attitude, she makes an interesting contrast.

14. When can we expect the next parts of your trilogy?

We don’t have a specific date at the moment, but “Children of the Guild” (“Dzieci Gildii”) should be coming this fall. I’ll just tell you that there is something to wait for!

A political scientist and advertising specialist by education, and a passionate blogger with a specific one sense of humor, ironic approach to pop culture, publishing at www.gosiarella.pl. Speaker at conventions, at which she spreads Asian pop culture and fiercely defends villains. A copywriter and devoted fan of superheroes who makes up for the lack of superpowers by writing. Maniac of serials and hopeless idealist.
(source: Wydawnictwo papierowy Księżyc)