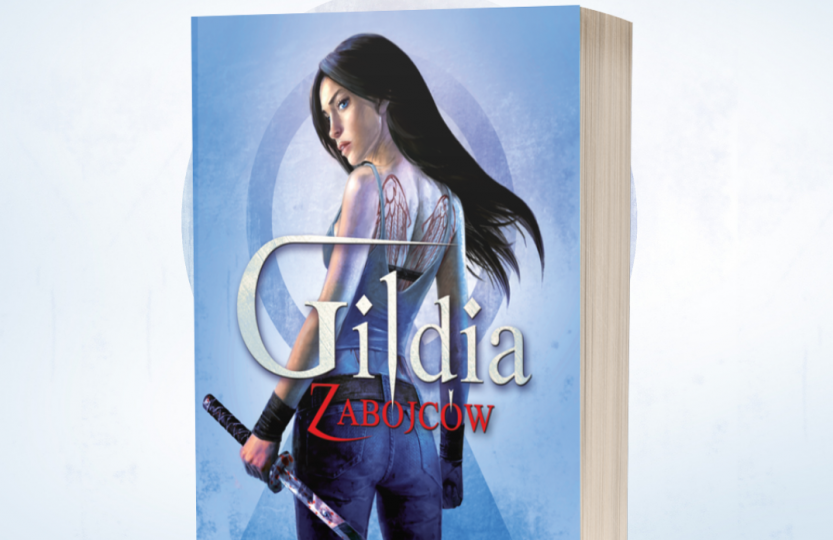 Do you know how you can recognize a good book? Sleep loses its value when you read it. This is what the latest novel of the Papierowy Księżyc (Paper Moon) publishing house is like – “Assassins’ Guild” – a great writing debut by Małgorzata Stefanik (known online as Gosiarella). This is the first part of the trilogy announced by the author about the adventures of young Alyssa, a member of a mysterious assassin organization. When I started reading it, the first thing that occurred to me was a strong association with the world of John Wick’s films, but while reading it, I totally forgot about it. I was completely absorbed in the world created by the author. At times the action is carried out on different time dimensions, but it is done so neatly that the reader doesn’t wander in space-time.

I would compare this book with the neo-noir film genre, because it would be too simple to describe it as a adventure novel, and it has little to do with urban fantasy (no magic plot here). The world of assassins exists alongside the ordinary world. It is dark and dangerous. Curses, murders and dripping blood are daily bread for its members. However, if you only expect a dark and bloody story, I must worry you. The author has a great sense of humor. The dialogues are sharp, sarcastic, but never low and rude.

The novel is also full of interesting characters and events. Thanks to their detailed descriptions, everything easily materializes in the mind of the reader. Reading “The Assassins’ Guild” I had the impression that I was watching a well-filmed series. I knew exactly what the characters look like, what they do and feel at the moment. The greatest advantage of this novel is precisely the interesting, well-constructed characters. They are not one-dimensional, everyone has a story. Nobody is only good and only bad. I must admit that it has been a long time since I had the opportunity to meet such an interesting heroine as Alyssa.

Alyssa is not a perfect example of virtue, but that’s the last thing I would expect from someone who makes money by contract killing. She is a girl painfully experienced by fate, but instead of living like a victim, she began to live like a predator, whose existence is driven by a desire for revenge. She has her own professional code which makes her actions extremely effective. She is tough, strong and cool in interpersonal relations, but with humanity and empathy – especially towards the weaker and innocent. She has a sarcastic sense of humor, likes to tease people, and sharp answers give the opponent no chance.

Her relationships with men are very interesting, not to say complicated. The foster father (supervisor), protégé (recruit), mysterious and dangerous ex-boyfriend and the whole K-pop band are a big challenge for such a young woman. However, Alyssa is the type of girl who boldly deals cards in all this male company. She is not a person who can be manipulated, deceived or even seduced. You can bribe her, but only with good food. In the face of sweetness, she is almost defenseless.

Fans of Korean dramas and k-pop will surely be delighted that the author chose South Korea as the main setting for her novel, Seoul to be exact. If that was not enough, she involved four innocent boys from a Korean band in a brutal world where murder and torture are part of professional duties. I can safely say that they are the sweet icing on the cake of the dark world of the “Assassins’ Guild”. I’m sure many K-pop fans have dreamed of being friends with their idols, and this is what you will experience in this book.

I read the whole story incredibly fast, and I will just mention that the novel is just over 400 pages long. There is no place for boredom here. The action is fast-paced and multi-threaded. There was also a romance. We are dealing here with a love triangle, and maybe even a quadrangle. The vagueness of male-female relationships was fascinating. I felt a breeze of classic Korean drama here. I am very curious about the next parts of this trilogy. Will the level hold? Will I meet my favorite characters again?

After so much praise, it’s time to criticize. To be honest, I look for the flaws of this novel a bit by force, because I have not found anything that would disturb me very much in reading. Sometimes not everything was clear to me, as if the author forgot to share all the information with the reader, e.g. how did it happen that the European branch of the guild has its headquarters in Poland. The second thing that bothered me a bit was that the boys from the INTERSTELLAR had unlimited freedom of action. It is obvious to any fan of Korean pop culture, that Korean artists live in golden cages. But, as I mentioned it before, it didn’t take away my enjoyment of reading. The fact that you have to wait for Alyssa’s adventures is perhaps the biggest flaw of this book.

P.S. The book is written only in Polish, but I strongly encourage you to read this review. Who knows, there might be someone willing to publish this novel in English. I would like Alyssa to find fans all over the world, not only in Poland.