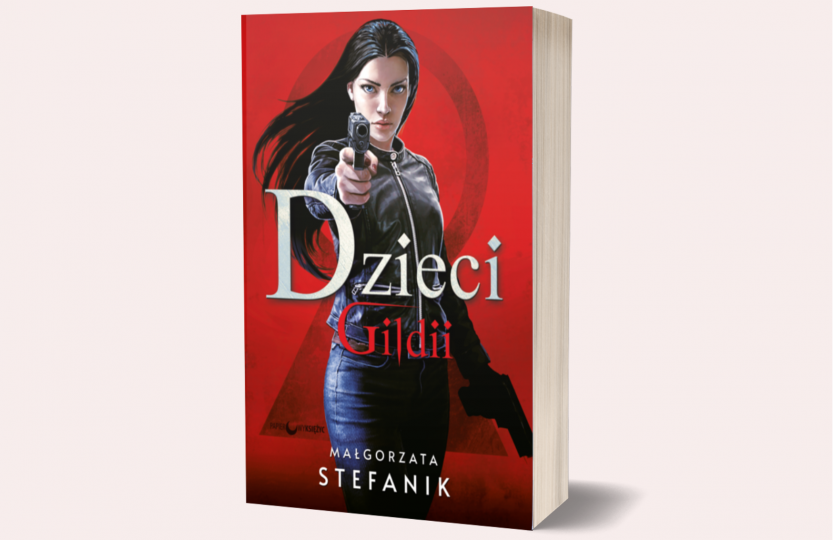 A few months ago, I was asked to help promote Małgorzata Stefanik’s (aka Gosiarella) literary debut mysteriously titled “The Assassins’ Guild.” Anyone who has read my review (you can read here) knows that I liked the book very much and I was looking forward to its continuation. This wonderful day has finally come. I have already read “Children of the Guild” and I am impressed. I am glad that I can help at least a little in promoting young Polish authors, especially when their work is really good.

I didn’t know what to expect from the second part. Unfortunately, very often the continuations of various novels are not successful. In this case, it was just the opposite. When I got “Children of the Guild”, I didn’t know if I would have time to read it. Recently, I mainly rely on audibooks to use my time efficiently, but I knew that a review wouldn’t be written by itself and time had to be found. I read the book in two evenings (383 pages). I couldn’t stop reading, and this has happened less and less to me lately. I can safely say that the second part is even better. In the first part you felt that it was a debut (very good, by the way), it was chaotic at times, but the second part is a real literary “meat”. There is more killing, more action, and more secrets. There are both the characters known to us from the first part, as well as several new ones.

The main action takes place this time in the USA. Alyssa has a new important assignment, after which she wants to go on a well-deserved vacation to deal with all the mess that happened after Dominik’s appearance. She has a large group of people to eliminate, so her friend from the American guild, Olympia, helps her. The flashbacks in the second part mainly concern the childhood of the young heirs of the world’s guilds. We meet young Alyssa, Kitsune, Ryu and Olympia. The beginnings of their acquaintance are not successful. Young people fight with each other, but also establish a thread of understanding with each other. Even then, a special relationship emerges between Alyssa and Kitsuna. Thanks to these memories, the reader can learn how each guild works and how differently it approaches the training of its members. Each branch of this secret organization has individual rights and different ways to shape effective killers.

After second part of Alyssa’s adventures, I became convinced that she is a special girl. It is rare for the main female protagonist to be involved in so many male-female relationships at once (not always romantic) and somehow control it all without unnecessary drama. I love her relationships with the men in this book because she is not submissive in any of them. It is she who dictates the terms of the relationship. Even if other men are her weaknesses (like Oliver), when something threatens them, she finds an incredible amount of strength to act. It seems to me that she is the weakest only in the confrontation with Kitsune, but to answer the question why, we need to know the history of their relationship.

I had a slight problem with Dominik and his thread. First, we still know little about him and his past. And secondly, it bothered me a bit that Alyssa approached her brother so normally and helped him, knowing what he had done to her loved ones. Watching Asian dramas, however, taught me to turn off logical thinking at times, so I coped with that as well. In such situations, you have to let yourself get carried away by the plot and only get joy out of it.

I’m glad how Jayden’s story turned out. I was a bit afraid of how the author would embrace it all without touching the romantic kitsch, but it turned out well. In the first volume I couldn’t make up my mind, but by the end of the second volume I knew that I was on the Kitsune team. The chemistry between him and Alyssa needs no words. I am curious about the prequel announced by the author, in which we will get to know their mysterious and twisted relationship. Hope there’s a hot romance going.

And now a very brief summary of the „Children of the Guild”. Do you know that feeling when you want to murder an author for the unexpected ending of her book? This is the case. The ending of the second volume leaves the reader screaming into space, “This is the end ???? Why ?? How could she leave it like that ???” If you thought waiting for the second volume was a torment, you will see what it means to real torture after the end of the second volume. This part opened up even more threads, the ending suspends the plot in a vacuum, and the reader can only wait. With this optimistic ending, I encourage everyone to read “Children of the Guild”. I don’t think you will be disappointed.