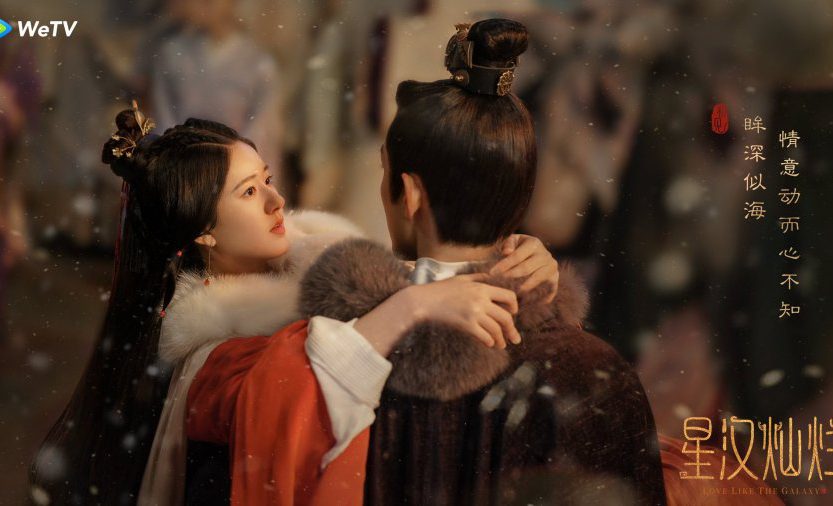 Finally, I was able to write about this drama. For 2 weeks I have been addicted to this relatively new Chinese production, which totally stole my heart. I don’t like this drama genre, I watched it really little. Too many episodes, political talks, and long scenes usually made me give up this type of drama. Not this time. This is one of the few dramas where I haven’t rewound a minute. I love it for everything. Waiting for the next episodes is real torture. The drama was divided into 2 parts. The first one has 27 episodes and the second one has 29 episodes. The first part ends next week, and apparently at the beginning of August they will show the second one, but it is not known how it really will be.

Okay, now what’s the drama about. Sorry everyone, but I can’t write briefly about this drama.

This isn’t a typical romance. It is more a story of a young girl Shao Shang (great Zhao Lu Si) who has been nice hard since birth. Due to the fact that her legal guardians completely neglected her education, the girl was able to develop interests in those areas that interested her (architecture, various types of structures and tools). Shao Shang is very intelligent, logical and at the same time very cunning and clever. She knows that she can only count on herself, so she cannot be manipulated (rather, she manipulates others).

Immediately after birth, she was left behind by her parents who went to fight the war. After 15 years, her parents and three brothers return home and cannot get over how badly their daughter is brought up. The mother-daughter relationship is very turbulent (very emotional scenes). It is impossible to totally hate a mother for her heavy and often unfair treatment of her daughter. You can see that she is doing it because she is worried about her daughter, but the methods she chooses are terrible.

On her way, the girl gets to know many people and the good sides and nightmares of living outside a safe home. One of the men he meets is Ling Buyi (the amazing role of Wu Lei). A young invincible general who arouses admiration and fear in many. As a young boy, he survived the massacre of his clan, and was then raised as a son by the emperor (I just love him). He is the only one who sees Shao Shang’s true nature, that she is passionate, sincere and kind to others (despite mediocre education and lack of knowledge of etiquette). He fell in love with her at first sight and repeatedly helped openly or undercover. Their romance is very slow. We are in the middle of the drama and we can only see the general’s passionate love. The main characters have few scenes in common at the beginning, but when they are together, the chemistry spills out from the screen in buckets. These are some of the better scenes in the drama. The drama is filled with great characters, wonderfully played. It would take a long time to describe them all here, but the most important thing is that we often see the development of even these less significant characters on the screen.

Summarize, the drama “Love Like The Galaxy” is probably the best drama in 2022. I can write a lot about this production, but I still have the feeling that it is still not enough. For me, it is a perfect drama in every aspect, it evokes great emotions, often extreme. In one scene you are laughing and in the other you are crying an emotional rollercoster, which is what I like. The main couple are wonderful and this drama is worth watching even for them. Some viewers complained about the slow first 4 episodes, but for me they were the perfect introduction to the story. No boredom. I recommend highly!!!